Will Chrome or Firefox Reach Version 100 First?
Posted by Harish Rajora on May 26, 2021

The two most popular browsers - Google Chrome and Mozilla Firefox are currently in a race to version 100. Currently, the latest Firefox version is Firefox 88 version while Chrome is at version Chrome 90. As Chrome is 2 versions ahead, does it mean Google Chrome will be the first to hit version 100? Let's find out! 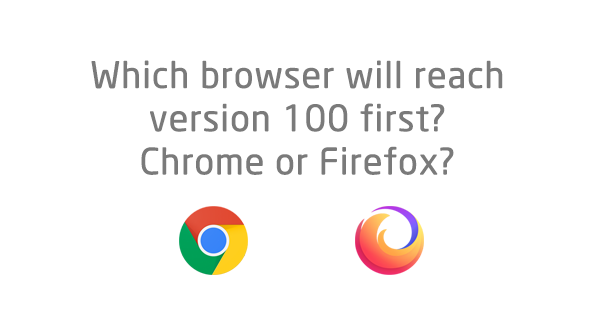 To determine which browser will reach the 100th version first, it's best to look at the dates of the past stable releases. Firefox has adopted a rapid release calendar plan, which means they have a strict four-week release cycle. The following table shows the last five releases by Firefox:

The latest version is Firefox 88, released on April 19, 2021. As we know that each next version is released every four weeks, we can calculate the future releases. We get the following data:

From this data, we can see that Firefox is expected to release its 100th version on May 3, 2022. This is assuming there are no delays in any of the future releases.

Note: You can launch all Firefox versions online from the Browserling cloud infrastructure by visiting the online browser page or by using this browser selection widget:

On the other side, Google Chrome currently is released every 6 weeks, which is two weeks more than Firefox. To their advantage, Chrome is currently running version 90, which is 2 versions ahead of Firefox and was released on April 13, 2021. Google Chrome's last five releases were the following:

On March 4, 2021, Google announced the following changes to their release cycle:

"We are excited to announce that Chrome is planning to move to releasing a new milestone every 4 weeks, starting with Chrome 94 in Q3 of 2021."

Google Chrome 94 will be released on September 21, 2021 and from this day onwards, Google will push new releases to their users every four weeks instead of six. On this day, Firefox will be at version 92 and both browsers will move at a constant pace relative to each other. Therefore, the first browser with the larger version on September 21, 2021 will be the first to reach version 100 (assuming the release cycles after this date remain the same). Now that we know this new information, it's easy to see Google Chrome will therefore win the race to the 100th version.

To be absolutely sure, let's check the release calendar of Google Chrome. It has the following data:

If you'd like to try all versions of browsers, then you can try Browserling - a cloud browser platform. You can get any browser on any operating system with a single click. Try it out!