Good news! Chrome 65 was released today. Not only that, but we also installed it on our machines, ready to be used in a testing environment for your web apps. Its features are mostly oriented towards web developers. You will be happy to know that Chrome 65 features a lot of visual functionality (see details below). And this is a screenshot of exact Chrome 65 version running in Brwoserling:

Try it yourself on-spot!

With this API you can automatically generate images that you can use for CSS properties like background-image and border-image. In a way, it is very similar to a canvas element, as you can use the new paint function to draw an image instead of referencing it. See this.

With the new Server Timing API you can allow the server to pass timing information to the browser, which will give you a better picture of your performance. Before this you have probably used the navigation and resource timing APIs. But now, the Server Timing API provides you an easy way for the server to report its performance timing. You can track as many metrics as you want: database read times, start-up time, or whatever is important to you, by adding a Server-Timing header to your response: Server-Timing': 'su=42;"Start-up",db-read=142;"Database Read"'. They are shown in DevTools, but you can also pull them out of the response header and save them with your other performance analytics. 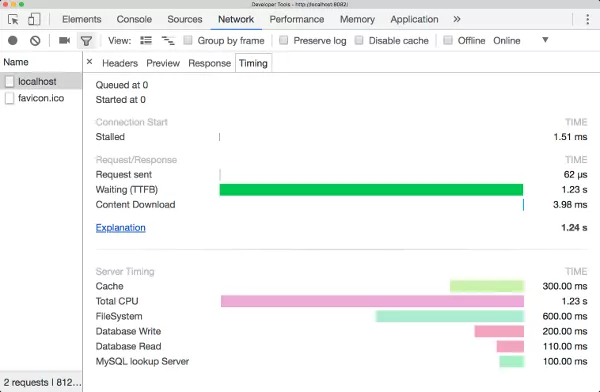 This is a new CSS property that once added to a container element, any children take its place in the DOM, and it essentially disappears. This is something that people call it a "CSS trick".

Developer features and updates in Chrome 65

Have fun cross-browser testing your code in Chrome 65 and see you next time!