Google just released version 20 of Chrome browser. We already have it in Browserling as it was actually uploaded to their ftp yesterday and we installed it before it was announced. For your convenience, we are writing this blog posts to summarize what's new in Google Chrome 20. We took this screenshot from within Browserling: 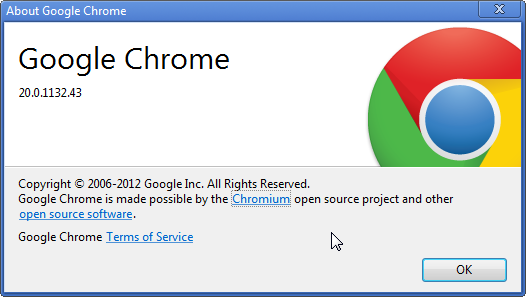 And you can test it for free, right away:

Chrome 20 is mostly about bug fixes. Beside the updated version number, Chrome 20 has a new, slightly larger "New Tab" button. It is often used so no wonder why Google decided to enlarge it.

The Web Inspector (Ctrl+Shift/Cmd + I or F12) settings now provides a helpful "Override device metrics" option to resize the viewing window and set font scaling. You will also notice the "Emulate touch events" option. All very useful for mobile developers.

3 internal (Chrome-specific) pages have been added to the browser:

Developer features and updates in Chrome 20

Have fun cross-browser testing your web pages in Chrome 20!