Browserling has a new friend - Chrome 17, the new version of Google Chrome. It was released just today and we installed it on our browser platform already. This version is a lot about speed and especially regarding security. 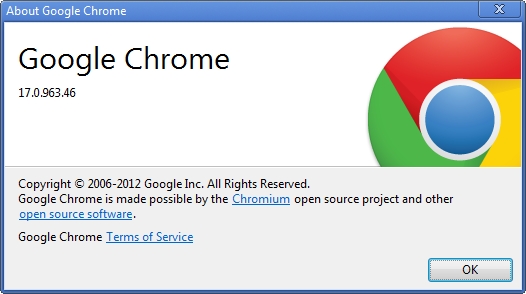 Try it yourself right away from our browser-testing widget:

Google now will automatically check for you executable files like .exe and .msi whether they match with a built-in white list of programs considered safe. Then it will also check the source site, whether it is known for malicious downloads. If the file is from an unknown source, Chrome sends info of the site and the file to Google server where it performs a number of tests and machine learning analysis, accounting reputation and trustworthiness of files previously seen from the same publisher and Web site to estimate a result that is ultimately sent back to you, warning you if you are at risk. You can of course, turn this feature off.

For those still not familiar with this concept, the omnibox preloading is when you begin typing in the addressbar (Google's omnibox) you start receiving a variety of suggestions that usually complete your typing. In Chrome 17 however, this feature will do more. It will also start pre-loading those websites so that if it guesses them right, the page will be loaded faster. That feature you can disable too from the options menu > Under the Hood.

Have fun cross-browser testing in Chrome 17!