Opera 44 Released and Deployed to Browserling

Opera 44 Released and Deployed to Browserling
Posted by Peter Krumins on March 22, 2017

Opera 44 was released yesterday and we just installed it to our browser testing cloud. Opera 44 is based on Chrome 57 that we already added to Browserling last week. Opera 44 is now fully available to everyone for cross-browser testing. 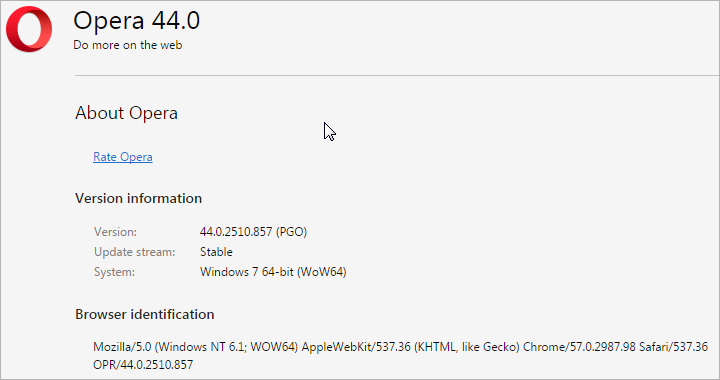 Opera 44 adds support for the Credential Management API. This gives users a simpler sign-in process across devices and provides websites with more control over the usage of credentials. The website can use password-based sign-ins via this API. Once logged in, users will be automatically signed back into a site, even if their session has expired.

Fieldset.elements now returns an HTMLCollection instead of an HTMLFormControlsCollection to better align with spec. The usemap attribute now requires case-sensitive matching. Custom message events and events created by client.postMessage(message, transfer) in a service worker will now use MessageEvent instead of ServiceWorkerMessageEvent.

The new AudioContext.getOutputTimestamp() method enables developers to synchronize DOMHighResTimeStamp and AudioContext.currentTime values. AudioBufferSourceNode, OscillatorNode, and ConstantSourceNode now inherit from AudioScheduledSourceNode, consolidating functionality. The new cancelAndHoldAtTime function cancels future AudioParam events with times greater than or equal to cancelTime, allowing developers to preserve the value of the scheduled time in a direct way. Developers can now construct WebAudio-specific events such as OfflineAudioCompletionEvent and AudioProcessingEvent.

The Fetch API Response class now supports the .redirected attribute to help web developers avoid untrustworthy responses and reduce the risk of open redirectors. The new padStart and padEnd formatting tools enable text padding, facilitating tasks like aligning console output or printing numbers with a fixed number of digits. To preserve consistency with other on

WebAssembly is a new type of code that can be run in modern web browsers - it is a low-level assembly-like language with a compact binary format that runs with near-native performance and provides languages such as C/C++ with a compilation target so that they can run on the web. It is also designed to run alongside JavaScript, allowing both to work together. WebAssembly is essentially a better replacement for asm.js.

Deprecated and removed features in Opera 44