Opera 43 is now available for cross-browser testing
Posted by Peter Krumins on February 7, 2017

Earlier today Opera Software released Opera version 43 based on Chrome/Blink 56. We just installed Opera 43 on all our platforms at Browserling. It's now available in our browser cloud for cross-browser testing! 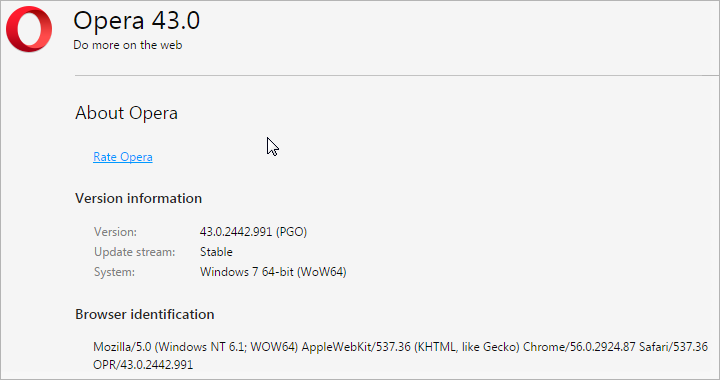 A new performance feature called Profile Guided Optimization (PGO) was added. PGO is a compiler technique able to make programs working on Microsoft Windows significantly faster. With PGO, we can teach the compiler what usage scenarios are important so that Opera can perform those tasks even faster, using even less CPU.

Non-whitespace Unicode control characters will now be rendered according to the specification, rather than being ignored.

The new Referrer-Policy HTTP header allows sites to forward site traffic by URL without leaking the user's session identifier or other private information.

Opera 43 brings you classic link selection. With this feature, you are able select text in the link without triggering the link.

ImageBitmapRenderingContext can be used to reduce memory consumption and compositing overhead by rendering pixel data in the form of an ImageBitmap.

The KeyboardEvent interface now supports the isComposing attribute which returns true if this event is fired between compositionstart and compositionend events.

Instant page loading is a technology that predicts which website you're typing the address for. Once recognised, it begins loading the site in the background even before you hit enter. Instant page loading becomes smarter over time by learning which URL inputs led to a specific website.