Good news - after weeks of hard work Google developers have brought to us the new Chrome 13. Moreover, we've already installed it at Browserling, ready for your testing needs. 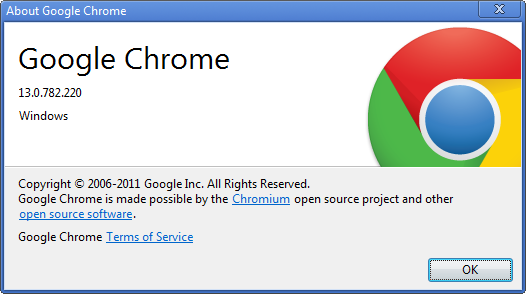 Chrome Instant Pages (Not to be confused with Chrome Instant) requires that Chrome itself and the site should support this feature. For instance Google Search. The concept is that when you perform a search in Google, the browser will pre-load the page for the result link you're most likely to click on in the background. The pre-load is actually not only for the base HTML file. Chrome downloads all resources, and even executes javascript before the user clicks on the search result.

Currently, Google Chrome is the only browser to come with Adobe Flash built in. Users usually find installing it separately for annoying. Also it will do the updates automatically, because the frequent urge to update Adobe Flash has been equally annoying. Currently for Windows 7 and Vista, the Flash scripts will run in an isolated sandbox so that it doesn't have access to critical system areas. This faced the previously-mentioned security issues with Adobe Flash.

There is also a built-in PDFsupport, sparing you the torment of installing some plug-ins to view such a specialized Web content. When you load a PDF, an intuitive toolbar shows when the cursor is in the southeast vicinity of the browser window. There you can choose to execute a variety of different things such as zooming in and zooming out.

This is one of the most anticipated features for Google Chrome to this point. It is their innovative performance solution to pre-load websites as you type their url in the "omnibox" (another name for the address bar). There is still much work to do on this feature, but it's there.

Developer features and updates in Chrome 13

Have fun cross-browser testing in Chrome 13!