Today Opera 42 browser was released based on Chrome/Blink 55. We just deployed Opera 42 to our online browser testing cloud. You can already cross-browser test your websites in Opera 42! 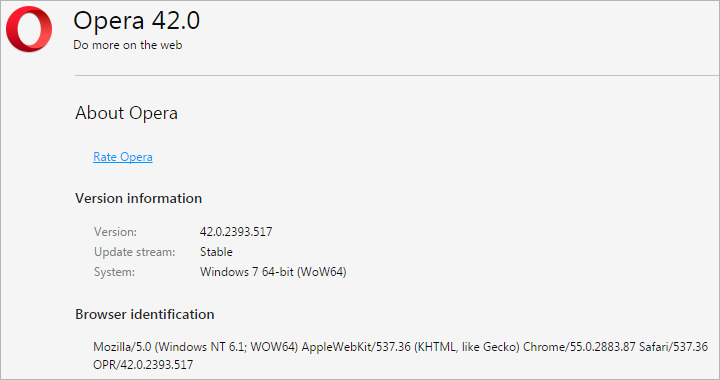 Opera now has an improved, faster startup mechanism. Opera now takes into account which tabs were most recently used before you quit Opera, instead of relying on the order of tabs to determine which ones to load on startup.

The hyphens CSS property is now supported (on Mac), which can be used to enable automatic hyphenation when text is broken across multiple lines. Possible values are none, manual (initial value) and auto.

The new version comes with the network installer for 64-bit builds, which installs the best option for you. In other words, it detects the architecture it's run on and installs either Opera 64-bit or Opera 32-bit.

Opera's personal newsreader has been given a fresh, new look and now offers an easier way to discover feeds. If a page publishes a web feed, a little newspaper icon will appear in the address bar. Simply click it and then select one to open. If you find it interesting, you can always add it to your existing sources. We want to keep the address bar as clean as possible, so this feature is disabled by default.

The async and await keywords are now supported, which allows writing Promise-based JavaScript with a neater syntax, and enables use of try/catch to catch rejected promises.

The TLS stack now implements GREASE, a mechanism to help prevent problems with buggy TLS servers. RSA-PSS signature algorithms have been added to TLS to prepare for TLS 1.3.

Opera is now the first of the major browsers to add a built-in currency converter. The user select the price they want to convert on the page and Opera will automatically show it in their local currency. Opera 42 supports conversion in 32 currencies based on daily values from the European Central Bank.

The PointerEvent standard is now supported. It gives developers a unified API for handling "pointer" user input, whether that is mouse, touch, pen, etc. PointerEvent also does not block scrolling, which should reduce jank during scrolling. The auxclick event is now fired for non-primary mouse buttons, instead of click.

What was deprecated and removed in Opera 42?