Yesterday evening Opera 41 update was published. Opera 41 is based on Chromium 54. We worked quick and installed it in our browser cloud. You can now cross-browser test your websites, javascript code and html designs in Opera 41! 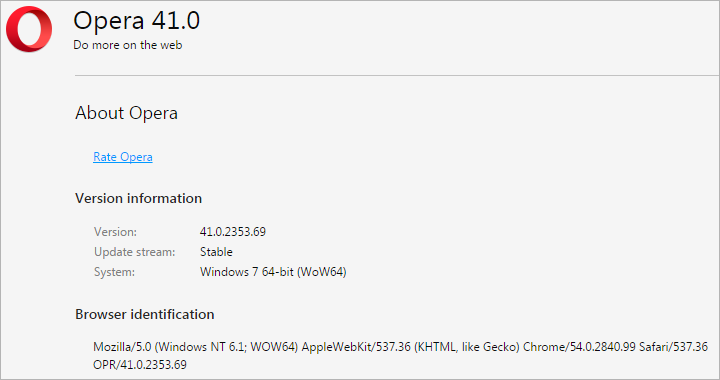 With Opera 41, you get a fully hardware-accelerated video pop-out. The test results show up to 30% less CPU usage after this change.

You can now use user-select instead of -webkit-user-select in CSS. The user-select property makes it possible to specify which elements in the document can be selected by the user and how.

Sites can use Node.prototype.getRootNode(options) to obtain the root for a given node.

Custom elements form the foundation of web components. The initial version of the API, also known as Custom Elements v0, has been supported since Opera 20 & Chrome 33. With the v0 API, a new custom element was defined using document.registerElement().

The most recently active tab and any pinned tabs will load first, while less important tabs will be loaded with decreased priority. For most users, this will feel like the tabs are opened immediately, without waiting time.

The full set of CacheQueryOptions is now supported, making it easier to find the cached responses you're looking for. The following options are supported: ignoreSearch, ignoreMethod, ignoreVary, cacheName.

The BroadcastChannel API allows same-origin scripts to send messages to other browsing contexts. It can be thought of as a simple message bus that allows publish-subscribe semantics between windows, tabs, iframes, web workers, and service workers. It's similar to same-origin version of postMessage() API.

When using battery saving mode, Opera now detects which video codec can be hardware-accelerated and tries to choose that codec when doing video conferencing via WebRTC (this includes services such as Google Hangouts).

Navigations initiated in an unload handler are now blocked. Instead, any prior navigation will continue. This matches the behavior in Firefox, and matches Edge's behavior more closely than before.

Experimenting with post-quantum crypto for TLS

CECPQ1 is a post-quantum cipher suite: one that is designed to provide confidentiality even against an attacker who possesses a large quantum computer. It is a key-agreement algorithm plugged into TLS that combines X25519 and NewHope, a ring-learning-with-errors primitive. Even if NewHope turns out to be breakable, the X25519 key-agreement will ensure that it provides at least the security of our existing connections.

What was deprecated and removed in Opera 41?